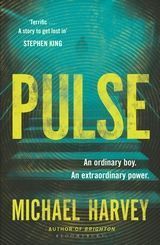 'Harvey's lethal imagination is cranked up to eleven in this one ... His best yet by far. Superb' Lee Child

Daniel Fitzsimmons seems like an ordinary American teenager. He loves his brother, his friends, his school work. But Daniel has powers. Powers that he does not understand and is not sure he can control.

Daniel can't risk telling those around him what is happening, but when a mysterious stranger offers an insight into what he is experiencing, he becomes Daniel's unofficial mentor. And when a tragedy threatens to derail his life, and with the police growing ever more interested in his past, Daniel's powers will finally come into their own.